You are here: Home / Guest Authors / The Surprising, Creative, Life Of Benchman. By Trev Jones.

The Benchman series of images impressed me from the time I saw the first one.

Creator Trev Jones has been a friend of mine for a few years, and I knew that he had a unique sense of creativity, but his Benchman series is, to me, quite spectacular.

Trev and I met in the WP dot Com community a few years ago, and his supportive and friendly attitude along with his creativity and web knowledge quickly cemented our friendship.

Not only is Trev a favourite WP community blogger with his blog, Silly Old Sod but also an excellent guitarist and photoshop creator.

With that in mind, I am pleased to feature, here on Surprising Lives, Trev’s first guest post.

I’m sure you will find his post enlightening and interesting.

“As far back as I can remember, I have always been a creative person. Nothing gave me more pleasure as a young boy than having a pencil and a piece of paper. I think life would have been much better, at least for me, if I hadn’t been sent off to school when I was 4. That’s when things started to go wrong. Too many rules and being told constantly that you’d never really amount to much. It’s surprising how many young lives must be ruined by supposedly educated adults telling them that they’ll never amount to much in their lives.

I found high school boring. The sound of some teachers wailing to impressionable minds with their political thoughts and snobbery. Some of them, back in the day, were complete sadists. Hitting children at the first opportunity and giving themselves some sort of power kick. It was all too much for me. There was light in my very dark tunnel and that was the art teacher, Mr. Godwin. A very kind Welsh gentleman he was and very supportive of any artwork I did. However, most of my schooldays were spent over the local park, alone, sat by a small stream known as the River Cole. Every morning I would make my way to school, catch the Number 55 bus to Shard End, walk past Jeff Lynne’s parent’s house where he was living and then I’d disappear over the park. They would always find me after about a month and I’d get dragged back to the classroom. It wouldn’t last long and then I’d be off in my fantasy world down by the river. This went on for about 4 years until I was old enough to work and they booted me out.

January 2nd, 1973 was my first ever day at work. Welcome to the real world. I did half a day and left. There wasn’t a park near the factory so I had to make do with wandering the city centre for the rest of the day. Returning home at night, my parents thinking, at last, their wayward son is settling down with a proper job and earning a living wage! I must have been such a disappointment. I was 16, I didn’t want to work in a dead end job for 60 hours per week, there must be more to life than this? The next three years were spent like this, start work on Monday morning, leave by lunchtime and wait until the next hopeless job came up.

The guitar was something I had always wanted to learn to play. My folks could never afford one when I was growing up, so it was down to me to buy one when I was old enough. That’s when I realised I needed a full-time job. At 19, I started work in a dead end job that was to last 15 years. However, this was 37 hours per week and the money was enough to let me save to buy that first guitar, a Madeira A20 made by Guild. Bob Marley had the same model and wrote most of his famous songs on it. I brought it and cherished it, loved it, polished it, changed the strings regularly and it changed my life. It’s still in my bedroom now, some 45 years later, still loved. The guitar was the first thing in my life ever to give me a reason to want to do something. Something to focus on that was away from the humdrum of daily life. Many hours were spent in my bedroom at my folk’s house learning that instrument. I would even turn the lights out so I could find my way around the neck in complete darkness. If I’m honest, I think my guitar playing is quite good, particularly finger picking and the old blues playing styles.

There were no computers when I was growing up. Then in 1981, the Spectrum ZX was launched. I was amazed how you could write a little program to make it do simple tasks. It used a language known as BASIC which was quite easy to learn. Why it fascinated me so much I have no idea. The programs were just simple things like drawing a circle and make it change colour and then change to another colour. All useless stuff, but creative. I was that blown away with it I even enrolled on a university course through the Open University here in the UK. I spent 3 years doing that. It’s degree level stuff too. All of this was pre-internet days. That all seemed to start around the late 90’s. By now, I was married with a young family of 2 daughters. My working life had seen me gain employment in the local car plant, working on the shop floor, better known as a track rat! This was proper work with varying shifts spread over a month. Your body didn’t know if it was coming or going. However, the guys I worked with turned out to be real diamonds and the pay was excellent. It was hard, damned hard, but it did allow me to do many things that were impossible to even think of doing before.

My first website was a family history page. It had to be written in HTML, all hard coded with pictures that took forever to load. Great, creative fun and it was all new technology for everyone. I got involved in some technical processes too using something called PHP and XML. I wrote a webpage that would take an XML feed from a travel agent and set it through PHP so it would be nicely laid out on the screen. It worked really well, but I couldn’t keep up with the big boys in the business, but I learnt so much from the experience. As I said at the beginning, I’ve always been creative and together with my interest in computer technology I suppose the next natural step would be to blog. Hence my Silly Old Sod blog being launched. With my love of art, I found Photoshop, which leaves me breathless at times. If someone said they could create a software that would be able to put your imagination into pictures in my lifetime, I would have never believed it! Photoshop can do that. Whatever you can think of, Photoshop can get it down and much more. Then came Benchman which is a photograph of someone I took from behind sitting on a bench. I have had so much fun placing Benchman in all sorts of scenarios, from famous paintings to surrealist images from the depths of my mind. So many people message me to say how much they enjoy the artwork of Benchman. It’s all a far cry from the days of my youth, the adolescent days of raging hormones and sitting for hours by the river. Be careful when you chastise a young person, it can change their lives forever.”

Thanks so much, Trev. 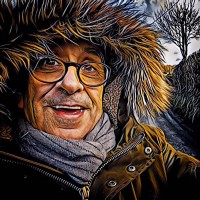 Trev is the brains and wit behind the blog, https://sillyoldsod.com and the Photoshop genius behind Benchman.

Do You Feel Safe? Being Jewish In The USA, Today.
Next Post: Happy Christmas Eve From Surprising Lives »