You are here: Home / How 2 Navigate Life / How To Spot And Manage Judgmental People 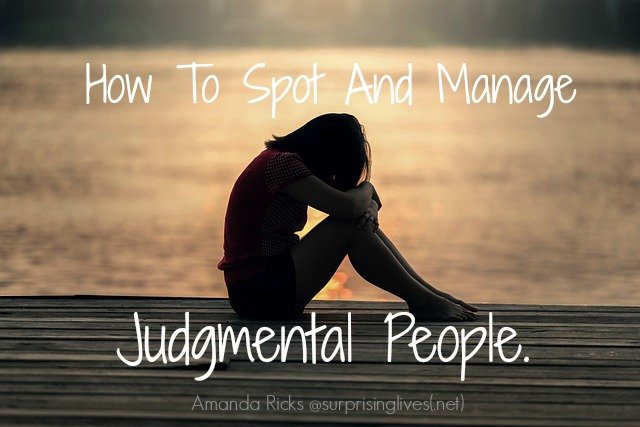 People who are judgmental and people are problematic psychologically. Judgmentalism involves making negative assessments of other people and thereby enhancing their sense of worth by comparisons with the (supposed) lesser status of others.

Judgmentalism involves finding satisfaction in seeing others fail because theoretically, it shows that they are better than you are.

Often people who tend to feel morally inferior feel relief when they look at others fail. By comparison, they see themselves as not so bad after all. Those who are judgmental participate in one-up-manship.

There are many different types of judgmental people, but most of them are also critical of themselves and probably most importantly feel judged themselves. That might be hard to believe, but it’s usually the cause of this type of behaviour.

There is a well-known book written around the concept of judgmentalism. How Full Is Your Bucket? By Tom Rath and the late Dr. Donald Clifton.
To sum it up, we all have invisible “buckets,” which get filled with positive feelings from a supportive and accepting upbringing, kind words, and good actions. But people who have “empty buckets” for whatever reason will often try to make themselves feel better by making others feel worse, i.e. by dipping into your bucket. Unfortunately, this type of behaviour only succeeds in making both people feel bad.

The critical thing to remember and focus on is that many judgmental people who continuously criticize are coming from a low place with an “empty bucket” (lack of confidence, envy, low self-esteem). Sometimes it can be easier if you view and hopefully understand their lousy behaviour through this lens.

However, ultimately it’s you that you need to protect and look after when faced with judgmentalism and judgmental people. So let’s look at some tip-offs and toxic behaviour of people who judge.

Overall, it’s important to remember that judgmental people have distorted perceptions of other people, of themselves, and of what matters most in living life. Judgmentalism feeds on and engenders a lack of sympathetic understanding of others, and often links with other related character flaws: hypocrisy, self-righteousness, malice, insensitivity, and the enjoyment of negative gossip.

How To Manage Judgmental People:

A Night Out
Next Post: Judgmental People – Top Quotes