You are here: Home / How 2 Navigate Life / Some People Never Change, Why? 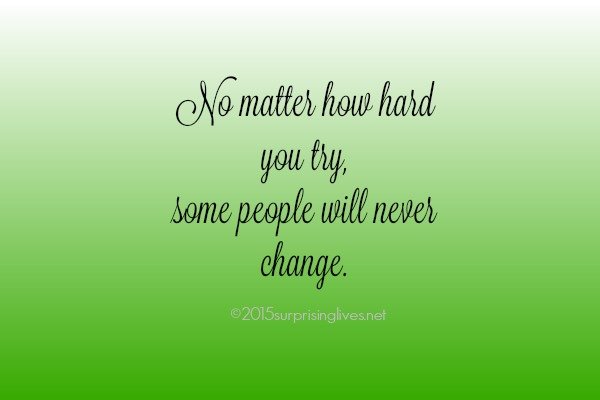 Some people will never change” is one of my site’s top search terms. Surprised? I agree. In fact, I thought it was some fluke until it kept showing up every day month after month.

I love watching the search term results because it gives me great ideas for what’s going on in people’s minds and what are people’s current concerns. Obviously, in this case, people are struggling with the idea (presumably) that sometimes or in some cases all the time other people (just) don’t change.

People are feeling let down, disappointed, frustrated and other various motivating emotions that are driving them to the web for answers.

People need others to change behaviour, attitude or even just their manner or tone sometimes. It’s all well and good to say “don’t allow yourself to be treated in a way other than a manner that is healthy and beneficial to you and the relationship.” However, reality has an annoying habit of creeping into these types of blanket statements.

There are countless relationships that we’ll have in our lifetime that we can’t just walk away from. These are the kind of relationships that we have to stick around for and try to make work. Perhaps because of family ties, commitments, promises, either to yourself or the other person, need, obligation, children, illness, the list goes on.

It’s not easy. Relationships are the hardest part of life. Yet, we can’t go through life without them.

There is a multitude of reasons why different people either, can’t, don’t, won’t, or keep messing up change.

Here are some points on why SOME PEOPLE NEVER CHANGE:

Say “I do” to Marriage and a Happy You
Next Post: Sharbat Gula, The Afghan Girl: Where Is She Today?