You are here: Home / Life / The Women of Kobane And Their Unique Facial Tattooing

In Syrian refugee camps in Turkey across the border from Kobane, Syria women can be found who display a faded rare art form called  – DEQ facial tattoos. 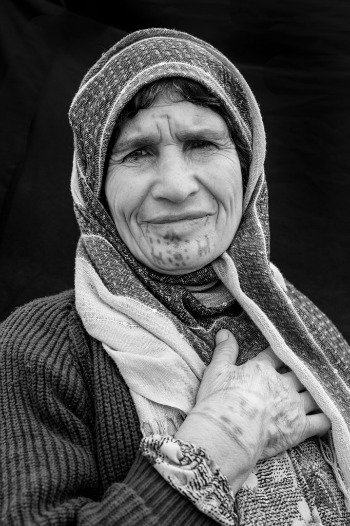 DEQ have been seen them in Turkey amongst both Arabs and Kurds, especially in the province of Urfa, but it wasn’t until the conflict in Kobane that the tradition naturally extended across the border to Syria. On both sides of the border, people are connected by language, tribe, and ethnic identity, so it makes sense that they also share other cultural attributes. 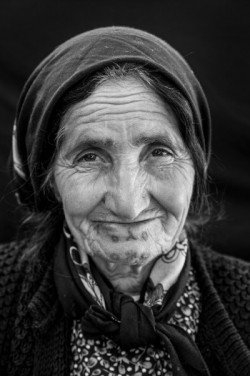 Finding historical facts about the Kurdish DEQ tradition is difficult. We can surmise, however, that the tattoos are not exclusive to Kurds or this particular region but are spread throughout swaths of the Islamic world. 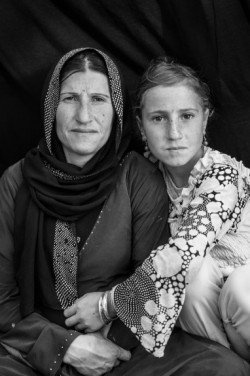 Many women reported being tattooed by a “nomad” or a “gipsy woman,” and these travelling tattoo artists may well have dispersed the tradition. Some of the designs are unique, possibly referring to pre-Islamic religions that are, in some way, still in the hearts of some Kurdish people.

The tattoos are made from soot and breast milk and sometimes gallbladder liquid from a sheep or goat. The design is drawn on the skin, and then a series of small punctures are made with a sewing needle. Then the mixture is spread over the design, which scabs over and leaves the tattoo. Most are done between the ages of eight and twelve. One woman even tattooed her own breasts, encircling the nipples with a thin round line.

An ethnomusicologist named Fethi Karkecili helped interpret the symbols. Plant symbols, he believes, refer to wishes for fertility, productivity, and strength. The V symbols are tribal identifiers, the size of the symbol corresponding to the scale of the family group. One woman had twin gazelles on her chin, probably in reference to the animal’s beauty and grace. 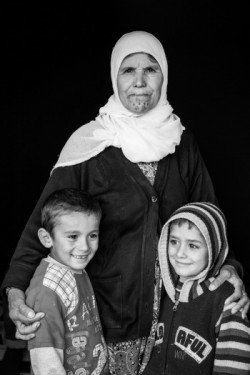 An often heard reason for the tattoos mainly being drawn from lip to chin is so sweetness can exit the woman’s mouth when she speaks. A tattoo between the eyes offers protection against Nazar, the evil eye. The moon next to the side of the eye may mean that the woman or her family converted from Yazidism to Islam but still holds some of the religious traditions.

Some women also shared tattoos in “secret places,” like on the ankle, neck, and even breasts. Mostly the women say that they were made for beautification, but some experts say that truly beautiful women sometimes had large tattoos made to hide their beauty, to protect them from the evil eye. 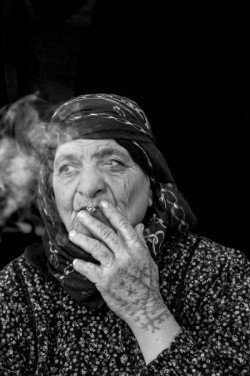 Some of the women were ashamed of their tattoos, they realised later in life that they are haram according to Islam, or they were made to feel old-fashioned by others. But most of the women are happy to speak about their tattoos—a subject other than the war, the dreary life of being a refugee, the pain of having deaths in their families and losing their homes.

One of the women happily shared stories of her husband’s fascination with her tattoos, recounting how he would kiss her tattooed places, including her neck and inner arm. In another case, a woman clearly enjoyed hearing her husband recall how at first glance, he fell in love with his future wife. He found her and her tattoos to be beautiful. Fifty years later, as they share a cramped tent in a refugee camp, he still does. 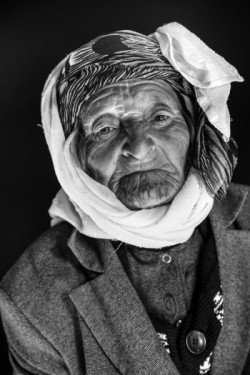 The DEQ tradition stopped being performed, for the most part, about 50 years ago.

If and when we find women under 50 with DEQ, the designs are minimalistic—a mere dot on the cheek, between the eyes, or on the chin. Almost all of the women were the daughters of tattooed women, but almost none of their daughters carried on the tradition. If asked why they mostly said it wasn’t “modern” or was “old-fashioned.”

It seems that globalization, combined with the mainstreaming of Islamic religious beliefs, have made women believe that according to Islam, altering the body in such ways is haram.

*These photographs are historical documents, to memorialise the women and their tattoos so that when they are gone, we can still remember them. Also, they bring attention to something unique about the culture of the people from Kobane, aside from their status as refugees.

*This post was made possible by an interview with Jodi Hilton which is published in its entirety in National Geographic at the link below.

Photos all courtesy of Jodi Hilton.

An additional article on this subject is:  http://www.pri.org/stories/2015-02-09/these-kurdish-refugee-women-are-proud-owners-facial-tattoos