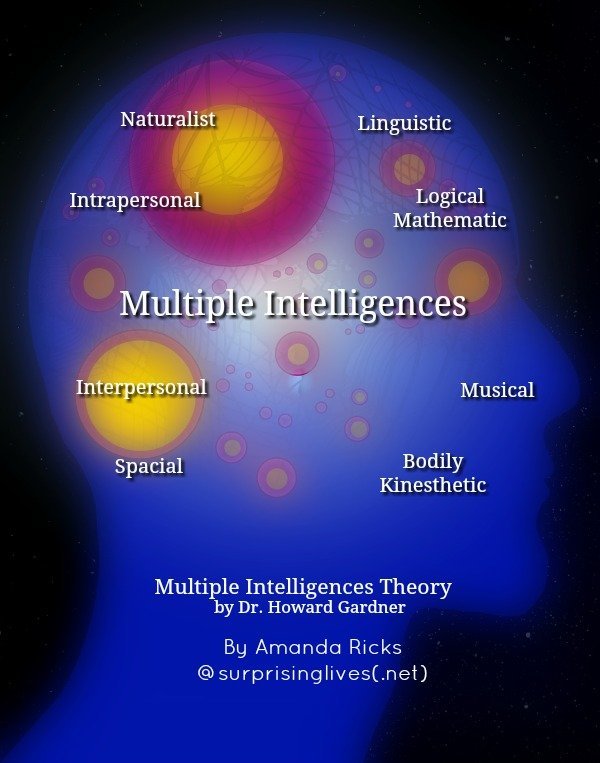 Discussions about intelligence have been going on for many years and will undoubtedly continue for much more. One of the most studied theories of intelligence typing was originally conceived almost two decades ago and still offers attractive alternatives to traditional IQ theories.
Harvard University Scientist Dr. Howard Gardner suggested and grouped the strengths of people into eight different intelligence groups. His theory has been studied by many other scientists and educators over the last twenty years, and it remains a viable alternative for intelligence typing.

“Multiple Intelligences, is a psychological theory about the mind. It’s a critique of the notion that there’s a single intelligence which we’re born with, which can’t be changed, and which psychologists can measure. It’s based on a lot of scientific research in fields ranging from psychology to anthropology to biology.” ~Howard Gardner

There are eight bits of intelligence in Howard Gardner’s Theory of Multiple Intelligences:

Dr. Gardner’s Theory has fascinated me ever since I first heard about it. I know many people who are strong in one or more of his Intelligence Theory groups. More to the point I know quite a few individuals who would not do well on a traditional IQ test, yet they have adamant and recognizable attributes from one or more of Dr. Gardner’s Intelligence groups.
Additionally, I know people who have followed their attributes as per the Multiple Intelligences Theory and found great success and fulfillment in their lives.
In turn, I tend to be suspect of traditional IQ tests because of the stringent categorizing and narrow results that they possess. The results lack any room for human individuality and can cause people that don’t fit the parameters of them to feel less than the desired “norm.”
There has been a lot of debate and criticism directed at Dr. Gardner’s Theory mostly because of its lack of empirical data and stats to back up the hypothesis. Despite the controversy, however, many schools exist that have curriculums based on Multiple Intelligence Theory basics.
Wikipedia has an excellent summary of an informal talk given on the 350th anniversary of Harvard University on 5 September 1986 which discussed the ongoing debate.
Ultimately Howard Gardner’s goal is to enlighten and open up people’s perception and opportunities. Here is a quote.

I want my children to understand the world, but not just because the world is fascinating and the human mind is curious. I want them to understand it so that they will be positioned to make it a better place. Knowledge is not the same as morality, but we need to understand if we are to avoid past mistakes and move in productive directions. An important part of that understanding is knowing who we are and what we can do… Ultimately, we must synthesize our understandings for ourselves. The performance of understanding that try matters are the ones we carry out as human beings in an imperfect world which we can affect for good or for ill. (Howard Gardner 1999: 180-181)

Dr. Gardner has written many fascinating books on different aspects of psychology, the mind, and intelligence. He is a thought leader in the field, and I believe someone worth listening to because he’s always asking, why. And, what if. These are important questions that I think we always need to ask ourselves if we are to keep evolving, ourselves, and as a society.
So I throw this question out to you. What is your experience or opinion with intelligence testing? Is it or has it even been an issue in your life? Are you willing to look at alternative theories?
For references and to read more about Dr. Gardner’s work go here. Or better yet pick up one of his amazing books and learn new insights into our minds!