You are here: Home / How 2 Navigate Life / The Surprising Science Of Happiness. 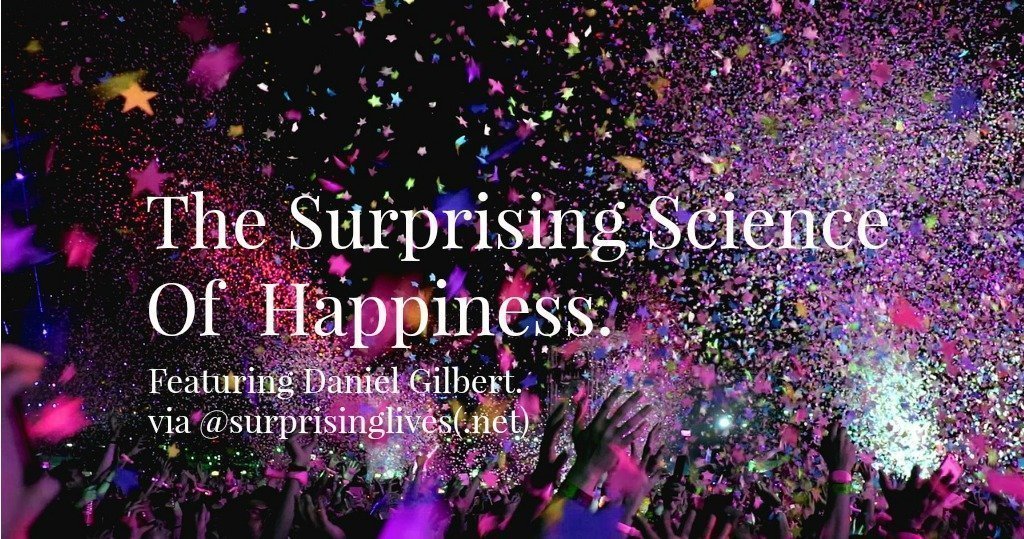 Dan Gilbert, the author of “Stumbling on Happiness”, challenges the idea that we’ll be miserable if we don’t get what we want.

Our “psychological immune system” lets us feel truly happy even when things don’t go as planned.

This theory of “synthetic Happiness” is both fascinating and reassuring news.

Watch Dan’s Ted talk and read an excerpt below to see what you think about this concept.

“When you have 21 minutes to speak, two million years seems like a really long time. But evolutionarily, two million years is nothing. And yet in two million years, the human brain has nearly tripled in mass, going from the one-and-a-quarter pound brain of our ancestor here, Habilis, to the almost three-pound meatloaf that everybody here has between their ears. What is it about a big brain that nature was so eager for every one of us to have one?

Well, it turns out when brains triple in size, they don’t just get three times bigger; they gain new structures. And one of the main reasons our brain got so big is because it got a new part, called the “frontal lobe.” Particularly, a part called the “pre-frontal cortex.” What does a pre-frontal cortex do for you that should justify the entire architectural overhaul of the human skull in the blink of evolutionary time?

It turns out the pre-frontal cortex does lots of things, but one of the most important things it does is an experience simulator. Pilots practice in flight simulators so that they don’t make real mistakes in planes. Human beings have this marvelous adaptation that they can actually have experiences in their heads before they try them out in real life. This is a trick that none of our ancestors could do, and that no other animal can do quite like we can. It’s a marvelous adaptation. It’s up there with opposable thumbs and standing upright and language as one of the things that got our species out of the trees and into the shopping mall.

All of you have done this. Ben and Jerry’s doesn’t have liver-and-onion ice cream, and it’s not because they whipped some up, tried it and went, “Yuck.” It’s because, without leaving your armchair, you can simulate that flavor and say “yuck” before you make it.

Let’s see how your experience simulators are working. Let’s just run a quick diagnostic before I proceed with the rest of the talk. Here’re two different futures that I invite you to contemplate. You can try to simulate them and tell me which one you think you might prefer. One of them is winning the lottery. This is about 314 million dollars. And the other is becoming paraplegic.

Interestingly, there are data on these two groups of people, data on how happy they are. And this is exactly what you expected, isn’t it? But these aren’t the data. I made these up!

These are the data. You failed the pop quiz, and you’re hardly five minutes into the lecture. Because the fact is that a year after losing the use of their legs, and a year after winning the lotto, lottery winners and paraplegics are equally happy with their lives.

Don’t feel too bad about failing the first pop quiz because everybody fails all of the pop quizzes all of the time. The research that my laboratory has been doing, that economists and psychologists around the country have been doing, has revealed something really quite startling to us, something we call the “impact bias,” which is the tendency for the simulator to work badly. For the simulator to make you believe that different outcomes are more different than in fact they really are.

From field studies to laboratory studies, we see that winning or losing an election, gaining or losing a romantic partner, getting or not getting a promotion, passing or not passing a college test, on and on, have far less impact, less intensity and much less duration than people expect them to have. This almost floors me — a recent study showing how major life traumas affect people suggests that if it happened over three months ago, with only a few exceptions, it has no impact whatsoever on your happiness.

Why? Because happiness can be synthesized. Sir Thomas Brown wrote in 1642, “I am the happiest man alive. I have that in me that can convert poverty to riches, adversity to prosperity. I am more invulnerable than Achilles; fortune hath not one place to hit me.” What kind of remarkable machinery does this guy have in his head?

Well, it turns out it’s precisely the same remarkable machinery that all of us have. Human beings have something that we might think of as a “psychological immune system.” A system of cognitive processes, largely non-conscious cognitive processes, that help them change their views of the world so that they can feel better about the worlds in which they find themselves. Like Sir Thomas, you have this machine. Unlike Sir Thomas, you seem not to know it.

We synthesize happiness, but we think happiness is a thing to be found. Now, you don’t need me to give you too many examples of people synthesizing happiness, I suspect. Though I’m going to show you some experimental evidence, you don’t have to look very far for evidence.”

Weekends! ~ Funny Quote
Next Post: Teen Lingo Finally Uncovered For You To Understand!