You are here: Home / News / Sharbat Gula, The Afghan Girl, In Trouble And Needing Help 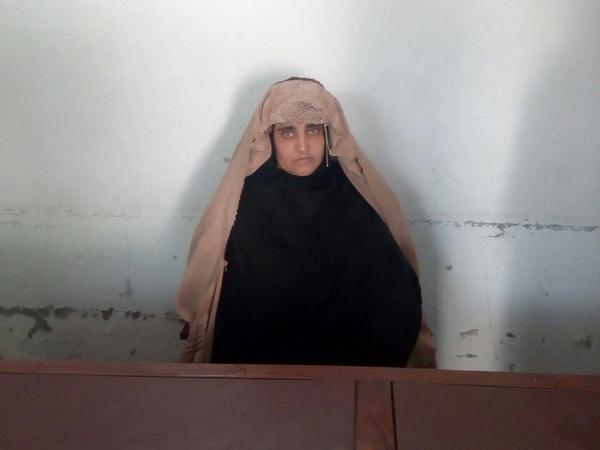 Her name, Sharbat Gula, in the Pashto language of the Pashtun people, means sweetwater flower girl. Her photograph of 1984 taken by Steve McCurry was National Geographic’s most famous photograph.


Sadly, the end of October 2016, Sharbat Gula was arrested with two men, said to be her sons, in Peshawar, Pakistan.
The action was a “complete contradiction” of the Pakistan government’s efforts to “win hearts and minds” in Afghanistan and was criticized by Amnesty International.
Gula, now in her 40s, became a symbol of her country’s internecine wars when her photo as a young girl with haunted eyes appeared on the cover of National Geographic in 1984.
She was held in jail in the northwest Pakistani city of Peshawar since her arrest following an investigation by the Federal Investigation Agency. The FIA accused her of possessing illegally obtained documents.
“During her illegal stay in Pakistan, she twice misused her position by obtaining a Pakistani Computerized National Identity Card,” judge Farah Jamshed said.
The card recognizes their status as an “Afghan citizen temporarily residing in Pakistan.” This state allows the resident the right to support themselves and the fundamental human rights such as a means to earn money and find a residence with water. These rights would not be afforded to Sharbat if she returned to Afganistan.
If Sharbat were to go back to Afganistan, she would face a life of dismal substandard living.
Returning Afghanistani residents are quarantined into camps. One such camp is situated in Char Rahi Qanbar, west of Kabul, and has more than a thousand families living in mud houses and tents. All residents are Afghan returnees from Pakistan and internally displaced persons.
The returnees from Pakistan started flooding the camps that were set up for internally displaced persons in Afghanistan who fled the war between the Taliban and the Western forces in their hometowns.
Photographer Steve McCurry, who took the famous photograph of Sharbat when she was 12-years-old in 1984 also raised concerns about her arrest and offered care and support.
On 27 October, Steve McCurry said: “In the past few hours, we have made contact with a prominent human rights attorney in Pakistan, who will take her case. We urge the international community to speak out on her behalf and the millions of others who simply need a place to live without fear.”
Chaudhry Nisar Ali Khan, Pakistan’s interior minister, did say that Pakistan would review her case on the grounds that “she is a woman” and the government “should see it from a humanitarian angle.”
The Pakistan government has stepped up its crackdown on Afghan refugees, insisting that many attacks in the country had links with Afghanistan and therefore the refugees must now go home.
Sharbat’s arrest highlights the desperate measures many Afghans are willing to take to avoid returning to their war-torn homeland as Pakistan cracks down on undocumented foreigners.
Pakistan had for decades provided a haven for millions of Afghans who fled their country after the Soviet invasion of 1979.
Until recently the country had hosted up to 1.4 million Afghan refugees, according to UNHCR, making it the third-largest refugee hosting nation in the world.
A further one million unregistered refugees were also believed to be in the country.
But since July hundreds of thousands have returned to Afghanistan in a desperate exodus amid fears of a crackdown, as even Pakistan’s famed hospitality ran out.
Here is a video showing Steve McCurry discussing Sharbat Gula’s case. via YouTube.