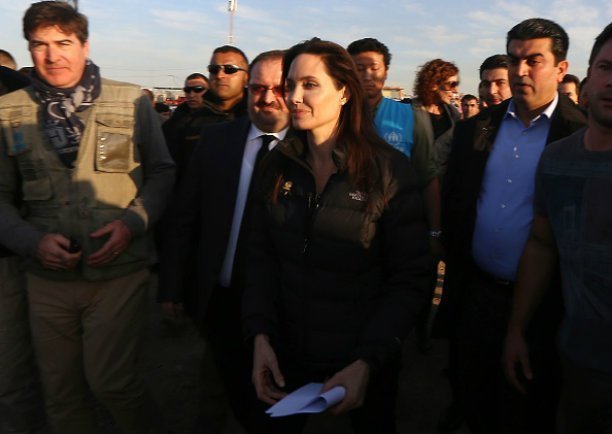 Humanitarian, Actress, and Director, Angelina Jolie has penned a new op-ed for the New York Times, calling for funding and a humanitarian response to the refugees of civil war in Syria and Iraq.

The mother of six traveled to Khanke, Iraq on an envoy with the United Nations Refugee Agency. While there Ms. Jolie documented the horrific living conditions under which families and survivors are living.

“These refugees and displaced people have witnessed unspeakable brutality. Their children are out of school, they are struggling to survive, and they are surrounded on all sides by violence,” Jolie writes.

For many years, I have visited camps, and every time, I sit in a tent and hear stories. I try my best to give support. To say something that will show solidarity and give some kind of thoughtful guidance. On this trip I was speechless,” she continued.

“What do you say to a mother with tears streaming down her face who says her daughter is in the hands of the Islamic State, or ISIS, and that she wishes she were there, too? Even if she had to be raped and tortured, she says, it would be better than not being with her daughter.”

Jolie has been a humanitarian and champion of refugees on behalf of the United Nations since 2001. She was promoted in 2012 to Special Envoy to the High Commissioner of the UNHCR.

“Stories of terror, barrel bombs and massacres have acquired an awful familiarity. There is a great temptation to turn inward, to focus on our own troubles. But the plain fact is we cannot insulate ourselves against this crisis,” said the Oscar-winning actress.

At stake are not only the lives of millions of people and the future of the Middle East but also the credibility of the international system. What does it say about our commitment to human rights and accountability that we seem to tolerate crimes against humanity happening in Syria and Iraq on a daily basis?”

A Woman To Admire

Thanks to theonlinesource.com for the quotes

Best Selfie Ever Taken From Burj Khalifa.
Next Post: Sometimes we have to laugh at ourselves #Quote