You are here: Home / How 2 Navigate Life / How important are friends? 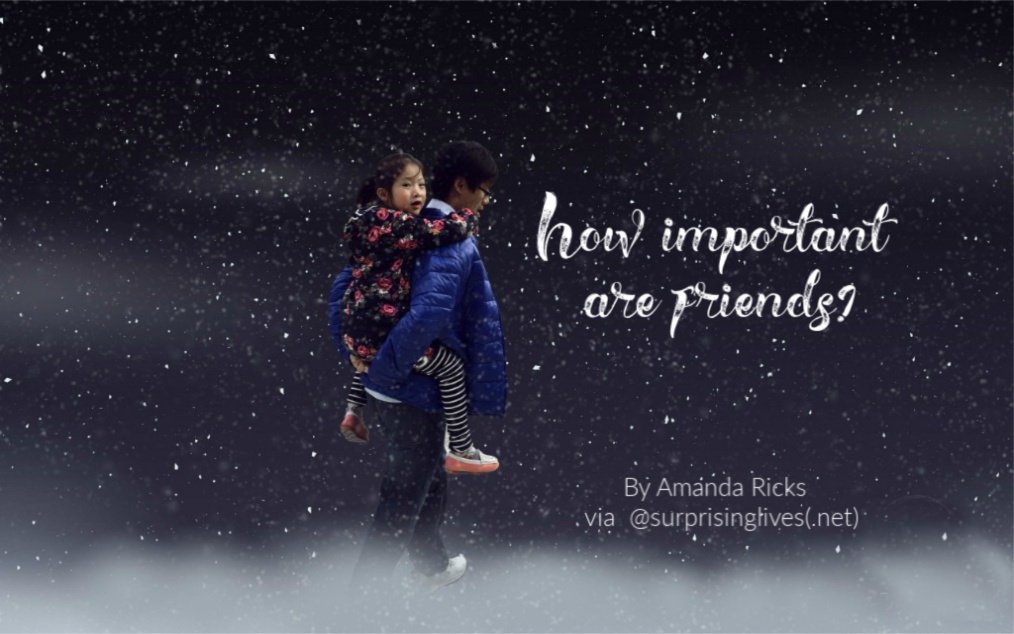 Friends represent the least clear-cut relationships in our lives; they don’t wear our wedding bands or share our DNA. But much clinical evidence shows the strength of these relationships can increase positive emotions and improve our health and well-being. We live more productive, fuller, even longer lives as a result of our friendships, experts say.

Yet many people tend to neglect to create and maintain these precious resources when other things, such as family and work, demand our attention.

Most Americans count just two friends when asked the number of people with whom they can discuss important matters, according to a study by Duke University and the University of Arizona. Researchers found the mean number of confidants had declined by almost one person—or from 2.94 to 2.08—between 1985 and 2004.

“This change indicates something that’s not good for our society. Ties with a close network of people create a safety net,” says Lynn Smith-Lovin, professor of sociology at Duke University and one of the authors of the study.

“A true friend is the greatest of all blessings, and that which we take the least care of all to acquire.” —François de La Rochefoucauld

Longer work hours and the increasing use of the Internet and other communication technologies may be to blame for declining relationships among broader networks of people, the researchers speculate.

Many people feel the added stress of life justifies spending less time on non-family relationships, but experts say those real stressors are the reasons we should not neglect our friendships. Dr. Michael Roizen, chief wellness officer of the Cleveland Clinic, says that while executives notoriously rate themselves high when it comes to business and financial success, “virtually none” are happy with friends.

He and other experts say friendships provide a buffer against stress, and people with more extensive networks of friends generally outlive those with fewer connections, plus are happier and more confident.

Especially during turbulent times, being connected to people adds a sense of security, even if you never have to call on them for help.

How many friends do you need?

The amount of friends you have is also very relevant.

Unfortunately, in the US and elsewhere, it seems we’re going down the popularity route instead of building close relationships. In 1985, a survey asked people about how many friends they discussed important matters. The most common answer was three, with 59% of people having three or more confidants.

In 2004, the most common response to this question was zero. Yet close friends and confidants are hugely valuable. One study suggested the benefit, from a health and happiness perspective, of having a good friend who you see every day is equivalent to an extra $100,000 on your income!

I like to refer to Kasser’s work with the brilliant research into primates by Robin Dunbar, where he estimated the maximum size of social groupings in apes as well as humans, based on the size of their brain.

It turns out the maximum number of relationships humans can manage is 150. This has become known as Dunbar’s number. What is less widely known is that his research showed other numbers too. For example, he found people tend to have five people closest to them, then the next level of closeness involves 15 people, then 50, then 150.

Nearly all the well-being benefits from relationships don’t come from the 500 Facebook friends, or even the 150 or the 50. They come from the 15. Quality time spent with your 15 closest friends and family will have a direct impact on your happiness, health and longevity (and theirs too).

As Ed Diener and Martin Seligman found from an analysis of very happy people, the thing that united them was strong ties to close friends and family and a commitment to spending real face time with them.

Distance and time can put a strain on friendships if you let them. But “Never feel afraid to contact someone after a period of time has elapsed,” says Keith Ferrazzi, author of Who’s Got Your Back and Never Eat Alone. “Approach it this way: Say you’re sorry you lost touch, and usually lead with some sincere flattery—say you missed the friendship that you had.”

For some people, there has to be a decision that friendships are worth setting time aside for and are just as important as meetings with clients and business partners, says Valorie Burton, life coach, speaker, and author of numerous books, including How Did I Get So Busy?

“Make an appointment with your friend just like you make appointments for everyone else, and integrate it into your schedule. Put boundaries on your time and make it non-negotiable. That might mean there are some things you need to adjust, but that’s what a priority is,” she says.

If being busy is an excuse, try replacing the word “balance” with “blending,” Keith Ferrazzi suggests. For career-minded Type-A personalities, he suggests thinking about ways to combine work, hobbies, friends and family. Do things you love while inviting people who are important to you; plan get-togethers that involve kids, too.

Ferrazzi also suggests that, as you build up your social network, you shouldn’t be afraid to share it. Find someone else with similar goals and objectives and say, “Let’s introduce each other to people; let’s get together and share the chores and the planning.”

Some people might have a more difficult time, possibly out of fear of rejection, fear of being hurt, even a feeling of not being worthy of these relationships, experts say. Avoid doing anything too painful, but when reaching out, put aside the fear of feeling uncomfortable. Know that many people are at least a little shy or somewhat awkward about reaching out and getting to know others.

People are complex, and relating to them one-on-one can sometimes appear harder than managing a business deal or even speaking to a large crowd.

First, lay aside old stereotypes. Everyone brings something different to the table, depending on many factors, including gender, race, background and personality. Making people feel comfortable is our job, Ferrazzi says. Try to figure out who they are when asking questions, and find reasons to care about them individually. “The basic issue is that we are all different, but we’re all the same in that we’re looking for meaningful connections,” he says.

Who’s Got Your Back?

Friends help us see the truth about ourselves, and allow us to share the truth with them without fear the relationship will be over, so communication is essential. “If someone has let you down or offended you, in a solid relationship, you should be able to say, ‘You told me you were going to do X and you didn’t. That hurt me,’ ” Valorie Burton says.

Placing a priority on human relationships is vital to personal as well as business success, as the two realms are increasingly interdependent. Even in tough economic times, connections don’t cost anything, yet are infinitely valuable. They provide innumerable benefits, and, yes, everyone needs to have fun once in a while.

Some people never change – Quote 2
Next Post: What do you see? Optical illusion pictures