You are here: Home / Life / Enough about owning our white privilege what are we going to DO about it? 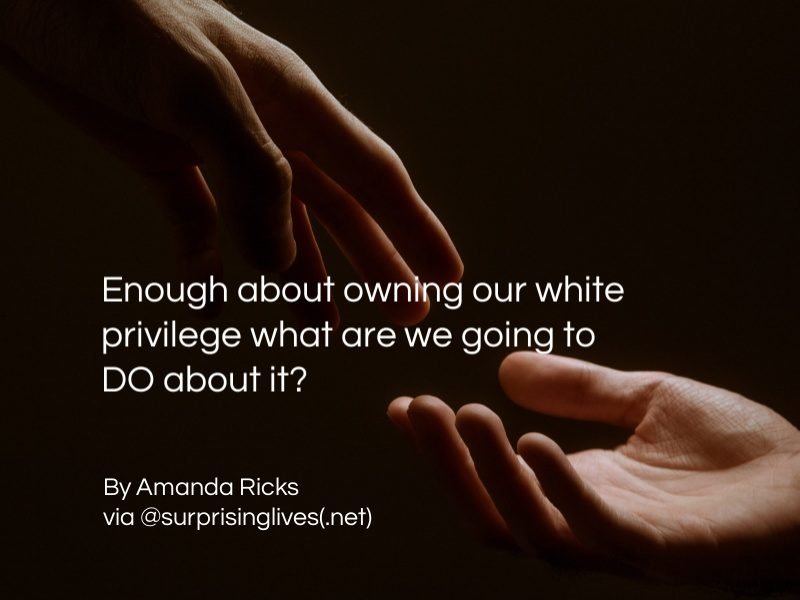 I’m white and like almost every other white person out there talking or writing about their white privilege right now I have something to say. But what I have to say isn’t what so many others are saying.

On May 26th, 2020 I, like most of the world, watched in horrified disbelief at a video from May 25th, 2020 showing George Floyd with his neck pinned to the ground by the knee of a police officer. The officer held Floyd down, knee to the neck, for 8 minutes. Floyd was pronounced dead minutes later.

But, what happened to Floyd isn’t new or unique.

I also have vivid memories of March 1991, when I, like everyone else, also watched in horrified disbelief at a video showing Rodney King being brutally beaten by police during an arrest attempt in Los Angeles.

And that’s not all. I am ashamed to admit that I, like millions of others, have seen and read about countless other horrendous situations faced by black men (and women) and police.

Every single one of these incidents is wrong. So wrong.

So, in response to all of this barbaric behaviour towards our fellow man people like me and you are sitting at their keyboards owning our white privilege as if that will make a difference. It won’t.

Our white privilege will only be something worth owning if it includes change.

We are way past and have been for decades, talking or even protesting about this shit. Talking and protesting have not worked.

We are so good at talking the talk but so bad at walking our talk.

And this problem is epidemic everywhere in way too many instances.

In recent months we have heard from and cried with Greta Thunberg as she passionately reminded us that the house we call earth is burning down. Our climate’s destruction has been decades in the making but we didn’t stop it. Or even help slow it nearly enough. Now it’s literally a life and death crisis.

But also, in the last few months, we have, and still are, battling a global pandemic that is only just getting started. A pandemic we knew was coming but didn’t prepare for properly. A pandemic that people are fighting more about than fighting against.

So, the question hanging in the air like a lead balloon is “what are we, you, going to actually DO about it?”

Stop talking, writing, protesting, and DO SOMETHING!

Use your money, your vote, your time, whatever your white privilege has so generously granted you, and do the change.

Every.Single. Person. on this planet can do something to stop this shit.

Making a difference (Quotes included)
Next Post: Once in your life, you will find someone