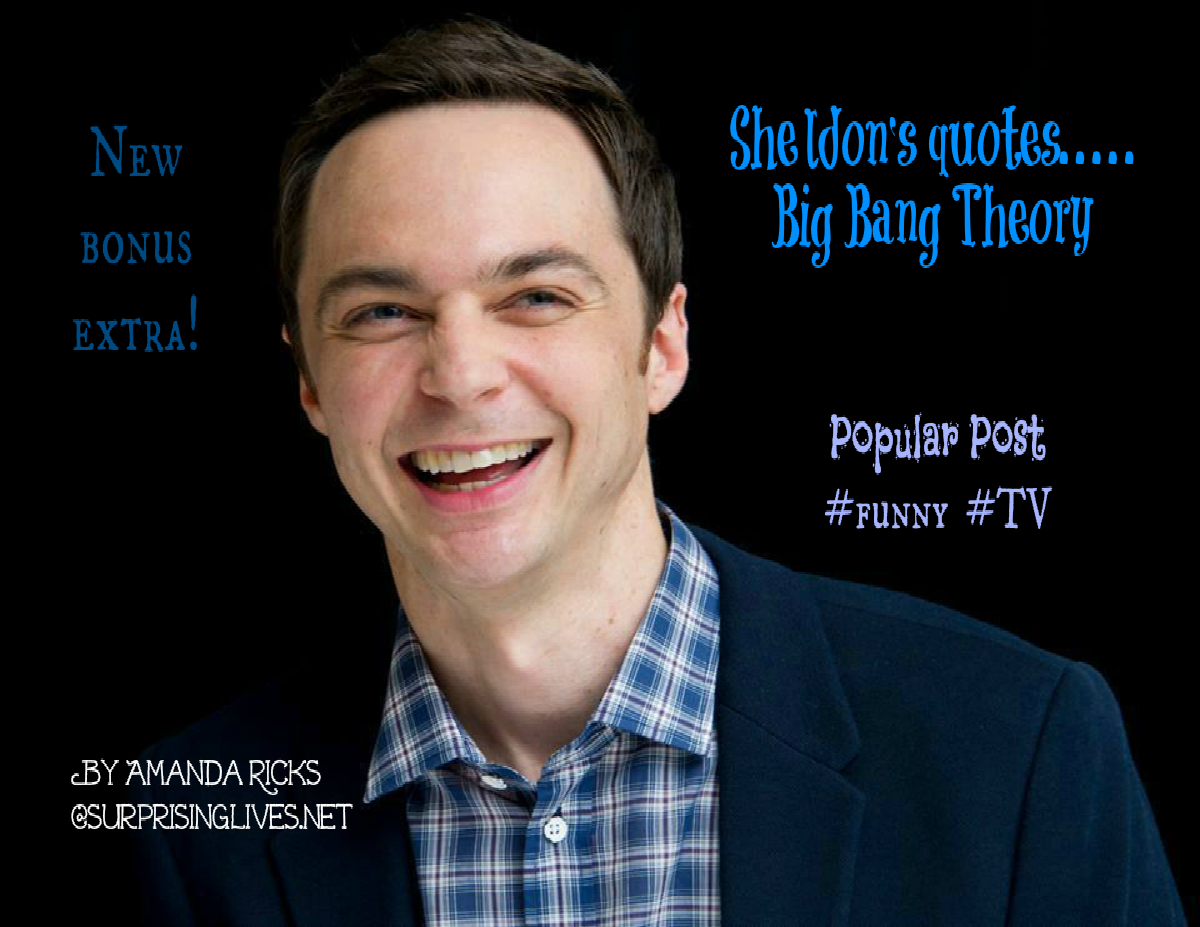 I am a Big Bang Theory fan. Which is weird because it is the only sitcom that I have ever liked. Nevertheless, repeats or not every night I faithfully watch it. I like most of the characters, but I have to admit that part of me wishes I was Sheldon.

Sometimes I wish I were Sheldon because he just comes right out and says whatever he wants and gets away with it. Everyone remains his friend. I know they make fun of him but he always gets his way, and he also gets away with outlandish remarks and behaviour. If only real life were that forgiving.

So in honour of Sheldon’s wit and candour here are some of his more memorable quotes from the show:

Sheldon: Why are you crying?
Penny: Because I’m stupid.
Sheldon: That’s no reason to cry. One cries because one is sad. For example, I cry because others are stupid, and that makes me sad.

Sheldon: I’ll get the blankets, you Google how to have child-like fun.

Sheldon: I’m exceedingly smart. I graduated college at fourteen. While my brother was getting an STD, I was getting a Ph.D. Penicillin can’t take this away.

Penny: This is why I’ve been saying we should keep the champagne on ice.
Sheldon: Sarcasm?
Amy: Yes.
Sheldon: That was tricky because when it comes to alcohol, she generally means business.

Leonard: Our babies will be smart and beautiful.
Sheldon: Not to mention imaginary.

Leonard: I did a bad thing.
Sheldon: Does it affect me?
Leonard: No.
Sheldon: Then suffer in silence.

Sheldon: I am not crazy, my mother had me tested

Sheldon: I think that you have as much of a chance of having a sexual relationship with Penny as the Hubble telescope does of discovering at the center of every black hole is a little man with a flashlight searching for a circuit breaker.

Sheldon: Good Morning your honour, Dr. Sheldon Cooper appearing in pro se – that is to say representing himself.
Judge: I know what it means, I went to law school.
Sheldon: Yet you wound up in traffic court.
******
Sheldon: You know, in difficult moments like this, I often turn to a force greater than myself.
Amy: Religion?
Sheldon: Star Trek.
******

Sheldon: Howard, you know me to be a very smart man. Don’t you think that if I were wrong, I’d know it?

Sheldon: Are you upset about something?
Leonard: What was your first clue?
Sheldon: Well, it was a number of things. First, the late hour, then you demeanour seems very low energy, plus your irritability.
Leonard: Yes, I’m upset!
Sheldon: Oh. I don’t usually pick up on those things. Good for me.
Leonard: Yeah, good for you.
Sheldon: (walks away and then turns back) Oh, wait. Did you want to talk about what’s bothering you?
Leonard: I don’t know. Maybe.
Sheldon: Wow! I’m on fire tonight.

Sheldon: For the record, I do have genitals. They’re functional and aesthetically pleasing.

Sheldon: You bought me a present? Why would you do such a thing? I know you think you’re being generous, but the foundation of gift giving is reciprocity. You haven’t given me a gift; you’ve given me an obligation. The essence of the custom is that I now have to go out and purchase for you a gift of commensurate value and representing the same perceived level of friendship as that represented by the gift you’ve given me. Ah, it’s no wonder suicide rates skyrocket this time of year. Oh, I brought this on myself by being such an endearing and important part of your life…

Sheldon: Interesting. Sex works even better than chocolate to modify behavior. I wonder if anyone else has stumbled onto that.

Sheldon: I can’t seem to get in touch with Amy. I tried e-mail, video chat, tweeting her, posting on her Facebook wall, texting her, nothing.
Leonard: Did you try calling her on the telephone?
Sheldon: The telephone. You know, Leonard, in your own simple way, you may be the wisest of us all.

Sheldon: What exactly does that expression mean, ‘friends with benefits?’ Does he provide her with health insurance?

Sheldon: Under normal circumstances I’d say I told you so. But, as I have told so with such vehemence and frequency already the phrase has lost all meaning. Therefore, I will be replacing it with the phrase; I have informed you thusly.

BONUS NEW QUOTE: Do you know this show?

Amy: You shut your damn mouth………Let’s get me waxed!

Sheldon: I enjoyed that a lot more than I thought I would. I look forward to your next birthday when we do it again.

That’s it for now, I’m so happy for them!

The end, until next time. 🙂

The Best Of A Commercial Christmas.
Next Post: 10 Powerful Insights To Ensure Success