You are here: Home / Life / Audrey Hepburn: Screen Legend And So Much More 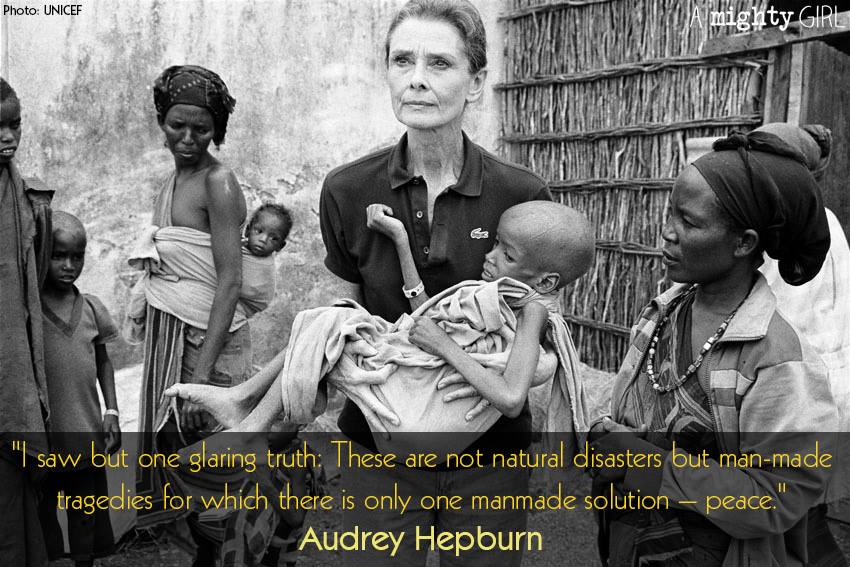 Born in Belgium in 1929, Hepburn spent her early teen years living in the Nazi-occupied Netherlands where she experienced the brutality and deprivation of war firsthand. She witnessed Jews in her community being rounded up in trucks and trains. The Nazis executed ms. Hepburn’s uncle and cousin, and Hepburn herself suffered from malnutrition during a period known as the “the hunger winter” when an estimated 20,000 Dutch people died of starvation.

Already an accomplished ballet dancer, she danced secretly for groups to raise money for the Dutch resistance. She once remarked that “The best audience I ever had made not a single sound at the end of my performances.” Her war-time experiences had an indelible effect on Hepburn and sparked her lifelong devotion to humanitarian relief work.

Fluent in six languages, she participated in field mission trips around the world and helped raise global awareness of humanitarian crises in countries ranging from Ethiopia to Guatemala. In describing Hepburn’s ability to connect with people, in particular children, during these mission trips, UN photographer John Isaac said, “Often the kids would have flys all over them, but she would just go hug them. I had never seen that. Other people had a certain amount of hesitation, but she would just grab them. Children would just come up to hold her hand, touch her — she was like the Pied Piper.”

Though Hepburn was deeply affected by what she witnessed during her humanitarian missions — when she went to Somalia in 1992, Ms, Hepburn called it “apocalyptic” But she remained hopeful about the future and especially about the impact of UNICEF’s work.

As she once observed, “Anyone who doesn’t believe in miracles is not a realist. I have seen the miracle of water which UNICEF has helped to make a reality… People in these places don’t know Audrey Hepburn, but they recognize the name UNICEF. When they see UNICEF, their faces light up, because they know that something is happening. In Sudan, for example, they call a water pump UNICEF.”

One year before her death in 1993, Hepburn received the U.S. Presidential Medal of Freedom, the country’s highest civilian honour, in recognition of her work with UNICEF. If you’d like to help support UNICEF‘s humanitarian aid programs on behalf of children in need worldwide, visit http://www.unicef.org/

A Woman To Admire

This post was made possible by an article from amightlygirl.com

Does Building A Sculpture Correct The Tragedy?
Next Post: Best Selfie Ever Taken From Burj Khalifa.